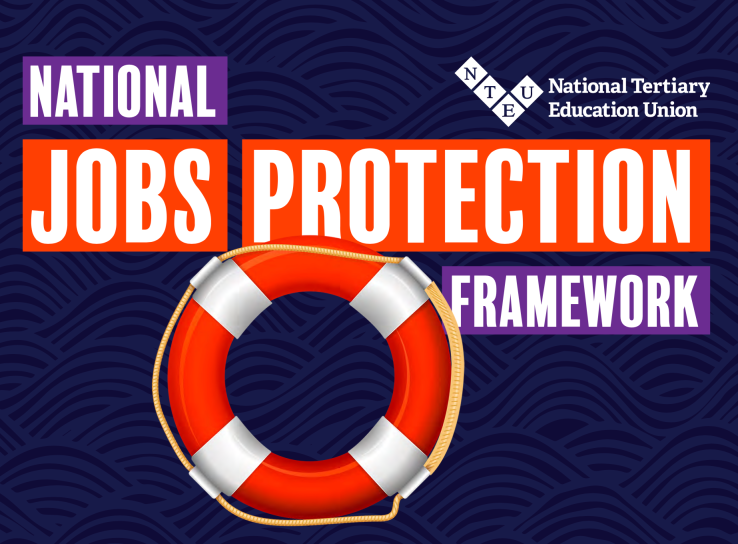 Next week, NTEU members will be called on to vote on the controversial National Jobs Protection Framework, the plan developed by the union’s national leadership, without any consultation of members, to address the crisis in university funding triggered by Covid-19.

Since information about the framework emerged, NTEU branches at Sydney, Latrobe, Monash, RMIT, Melbourne, Victoria, Sunshine Coast, UNE, UTS and Flinders have all passed motions, either at Branch Committee or membership levels – and sometimes at both – rejecting the deal or the principle of sacrifices on jobs, salary or conditions that it embodies. This list includes some of the smaller branches that the union’s national leadership is claiming the deal supports. The president at JCU, a smaller branch, has also publicly rejected the framework. Anyone still claiming that the deal is ‘obviously’ a good thing is ignoring the copious analysis that members all over the country have put into demonstrating the opposite.

While there’s been plenty of discussion so far of the numerous problems with the framework itself – 18000 ongoing jobs sacrificed without a fight, the structural abandonment of casualised colleagues, the fast-tracking of restructures, acceptance of the principle that overworked staff should pay for the crisis through salary cuts that will lastingly reset pay expectations in the sector  – less has been said about what the alternative to it is, and about why, if the framework is so bad, the national leadership would be recommending it so strongly. NTEU members uncertain how to vote next week would benefit from clarification of these questions.

The alternative – opposing cuts, not implementing them

The National Executive continually stress that the framework is the ‘only alternative’ to mass job losses. Many universities are, of course, in serious financial trouble, and can implement forced redundancies and other punitive measures to the full extent of the law. However, the national framework simply doesn’t prevent sackings: if the work no longer exists – exactly the situation give the Covid-downturn – then nothing stands in the way of redundancies, and the framework’s provisions are only a minimal improvement at best, and maybe no improvement at all on what the Fair Work Act already offers.

On the NTEU’s own admission, 18000 jobs may be at risk even if the framework is adopted. As the University of Sydney branch committee wrote to its members this week, recommending a vote against the framework, ‘while it is distressingly true that jobs are at risk without the Framework, it seems to us that those same jobs remain at risk within the Framework – and that we will have given up hard-won conditions for little gain’.

Other than redundancies, VCs will look to cuts to salary as a major means of absorbing revenue shortfall (stand-downs, to which the framework does bring some limited improvements, appear not to be VCs’ preferred cost-cutting tool: so far, there have been none or very few in universities). To achieve paycuts and other cost-cutting measures, however, universities have to implement variations to Enterprise Agreements – something that can only be done through a majority vote of all staff. Latrobe, headed by John Dewar, one of the country’s most enthusiastic and effective academic asset-strippers and a member of the team developing the framework with the NTEU, has already signalled its intention to do this.

As Latrobe’s move highlights, nothing obliges a VC either to negotiate with the union or to implement the agreement negotiated, and no VC is forced to opt in to the deal in the first place. Indeed, at least eight VCs, including those at Sydney, Newcastle, UTS, Melbourne, Edith Cowan, Flinders, and ACU, have already said they’re not interested, some of them taking the opportunity to score political points against the NTEU by claiming the framework is too harsh on staff. The fact that Dewar, one of the framework’s architects, is reportedly not even committing to sign his own institution up, despite commending it to staff, is a strong indication of how much freedom Vice-Chancellors have.

Strategically speaking, the only incentive for a VC to submit their institution to the constraints of the JPF is if they think that it is advantageous to them to do so. The NTEU is betting that VCs think that NTEU approval of the deal will make it easier to pass Enterprise Agreement variations – that staff will only be convinced into voting for EA variations if they have been approved by the union. On this calculation, the benefit of the framework for VCs is that it comes with union pre-approval.

But if that’s the case and the union really has the political authority on campus to block an EA, then why adopt such massive concessions at the very outset of negotiations? Why not adopt a combative rather than collaborative stance – one that makes use of workers’ power to advance their interests in their workplaces, rather than dealing them out from the very start of the process? Shockingly for a union, the national leadership appear simply to put no stock in the possibilities of political action in local branches.

When it comes to convincing staff to accept a paycut and other concessions, the balance of forces in individual universities will be the key determining factor. Branches prepared to mobilise members – and non-members – to actively oppose their university’s austerity plans, starting now, will be the ones that protect staff best. VCs already have the power to put a new EA to staff ballot with only twenty four hours’ notice. The time that the union has spent on the NJPF should have been spent preemptively campaigning, branch by branch, against any such moves.

Even small branches with few members can contribute significantly to safeguarding  jobs and pay by openly opposing VCs’ plans at the local level. There are numerous means short of industrial action to do so (so far, on different campuses around the country, NTEU members have organised petitions, protests, advocacy among students, and open meetings challenging the economic rationale for austerity). If these sound ineffectual, poor cousins of industrial action, there is nevertheless no alternative to them in the first instance. None of them is decisive in its own right, but all contribute to building a climate on campus in which VCs will no longer be the unique authoritative voice about their university’s direction. A strong contestation of the university leadership from the union branch has the clear potential to prevent VCs getting variations to EAs accepted.

The only way for branches that don’t presently have a significant presence on campus is to start activities that will foster it. That means the key political task for the union is to build local strength. Yet the Job Protection Framework does the opposite of that by taking decisions out of members’ hands and actually implementing the cuts that any union should be resisting. Voting for the framework means abandoning commitment to the principle that unions should campaign to defend their members from attacks, not team up with management to enact them.

If the plan is so bad, why would the NTEU leadership be promoting it?

Union members want to have confidence in their elected leaders. But those leaders aren’t infallible. Ours have, quite simply, made a mistake – one which is familiar in officials in union bureaucracies – and which they are now digging into.

Union officials are often conservative and pessimistic. Their bureaucratic world is one of procedure, permanent negotiation with employers, legal analysis, and relentless reminders of the hostility of external circumstances. They are far removed from the energy and political will of the members who face the urgency of a crisis. Unlike members, paid union officials are not at threat from the Covid downturn: none of them is being threatened with a salary-cut and none has already lost their job. Everything encourages them to seek out a negotiated, calm, low-risk fix, even if it is extremely low-return as well. Conservative underestimation of political possibilities and a lack of fight and conviction follow easily. As I’ve noted before, the union’s current National President has been an advocate of so-called “interest-based bargaining”, an approach to enterprise bargaining negotiations promoted by the Fair Work Commission and described as “focussing more on exploring common interests rather than just ‘arguing the toss’ around respective claims and counter-claims” (more details in the same earlier post).

It’s no surprise that the national leadership’s strategy will inevitably weaken the NTEU itself: already people are talking about wanting to leave the union in protest at the deal and the way it has been handled. Instead of leaving the NTEU, members should stay in it and campaign to change its direction. Officials, however, are saying that, as a result of the downturn in the sector, next year’s membership numbers might be the lowest the union has ever experienced. The fact they’re prepared to accept this with such apparent equanimity is shocking. Faced with the most substantial threat to jobs in the sector ever, the union leadership should be preparing a massive sector-wide fightback, not a surrender. Actually opposing VCs in defence of jobs would, at the very least, position the union as an explicit pole of resistance to university management, and show that our critique of managerialism is not, when it matters most, simply abstract.

Mistakes happen. If the internal union processes that led to the framework hadn’t been so highly undemocratic, this particular mistake could have been avoided. Instead, the framework’s opponents have been systematically sidelined. The national leadership have refused to distribute material for the no vote themselves, even instructing that branch resources are not to be used do so, thereby deliberately depriving members of the diversity of views they need to make an informed decision. They have also imposed a breakneck timeframe that requires members to decide on the most important union-related decision in their career at extremely short notice: less than a week before the vote, members have still not seen the schedule in which the detail of the agreement will be spelled out. These are all serious problems in an organisation meant to operate democratically and rationally.

As everyone is pointing out, with or without the framework, VCs will force redundancies in the months to come. But when the time comes to vary Enterprise Agreements, there will simply be no alternative to local organising. If union members do not organise and become active locally, wherever they are, no national framework can protect them from current cuts or from ones in the future. The real way we show solidarity to our union colleagues is by refusing to set the precedent for accepting attacks on staff, and by demonstrating what is possible through assertive, well-organised campus activity.

20 May 2020. Disclosure: I am a member of the Sydney University Branch Committee, and participated in the drafting of the email referred to.

The first version of this piece incorrectly stated that Latrobe’s John Dewar was intending not to sign Latrobe up to the Framework. This has now been corrected to reflect the fact that he is only not committing to do so. An amendment has also been made to reflect the fact that at least one of the branch votes referred to rejected the framework’s principle of sacrifices to jobs, conditions or salaries before the national framework document itself had been released.

View all posts by admin